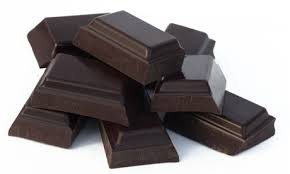 Scientific research continues to explore the therapeutic effects of eating dark chocolate. The polyphenols and theobromine found in cacao beans have a multitude of health benefits. Here are ten ways that dark chocolate can be used for disease prevention and treatment.

The polyphenols in dark chocolate can improve blood vessel function and lower high blood pressure. In a German study, 44 patients with prehypertension or stage 1 hypertension were randomly assigned to receive 6.3g a day of either dark or white chocolate for 18 weeks. Researchers concluded that the inclusion of a small amount of dark chocolate in the patients’ normal diet efficiently lowered their blood pressure without causing changes in body weight. White chocolate had no effect.

Doctors often prescribe aspirin to people with heart disease because it lowers the risk of blood clots in arteries that could lead to a heart attack. Research shows that the polyphenols in dark chocolate have a similar anticoagulant effect. In one study, participants were given either a cocoa drink, a caffeine beverage or water. Their blood was then tested. Blood platelet formation decreased after cocoa consumption but increased after caffeine and water consumption.

Dark chocolate contains a compound called theobromine which has been found to be more effective than codeine for treating persistent coughs. It works by suppressing vagus nerve activity to halt the cough reflex. In a clinical trial, approximately 60% of patients given 1000mg of theobromine a day experienced relief from coughing. Unsweetened dark chocolate has about 450mg of theobromine per ounce.

Chronic inflammation of cardiovascular tissues is a risk factor for heart attack and stroke. Recent research has discovered how eating dark chocolate could help reduce it. Scientists tested cocoa powders in a model human digestive tract. They found that microbes in the colon such as bifidobacterium metabolize the polyphenols in dark chocolate into easily-absorbed, anti-inflammatory compounds.

The antioxidant polyphenols in dark chocolate could help protect the body against colon cancer. In a Spanish study, rats were fed a daily diet consisting of 12% cocoa. A control group was fed an ordinary diet. After eight weeks all of the rats were exposed to a toxic chemical known to induce the onset of colon cancer. Those that had been fed with cocoa had fewer pre-cancerous legions than those in the control group. They also exhibited a much higher degree of apoptosis, or normal programmed death of potentially cancerous cells.

People with low insulin sensitivity require larger amounts of insulin to keep their blood sugar stable. This condition, known as insulin resistance, is a precursor to type 2 diabetes. The flavanols in dark chocolate increase the uptake of glucose in response to insulin. In a small Italian study, healthy subjects were given either dark or white chocolate bars for 15 days. Oral-glucose-tolerance tests showed that insulin sensitivity significantly improved in the dark chocolate group.

Chronic elevation of the stress hormones adrenaline and cortisol has been linked to high blood pressure, irritable bowel syndrome, depression and other disorders. Research has shown that polyphenols in dark chocolate lower the endocrine (hormone) response to stressful situations. In one study, men who underwent a stress test two hours after consuming 50g of dark chocolate had significantly blunted cortisol and adrenalin responses compared to a control group given white chocolate.

Oxidation of LDL cholesterol leads to the development of plaques in the arteries associated with heart disease and stroke. Flavonoids, present in dark chocolate and a variety of plants, inhibit LDL oxidation, lowering the risk of atherosclerosis. In one study, participants were assigned to either a low flavonoid diet or a diet which included dark chocolate. After four weeks, LDL was extracted from blood samples and subjected to oxidation. The chocolate diet slowed LDL oxidation rates by about 8% compared to the low flavonoid diet.

Pre-eclampsia is a disorder of pregnancy characterized by dangerously high blood pressure and high levels of protein in the urine. The only way to cure it is to deliver the baby, making it a common cause of premature birth. Yale University researchers asked 2,500 women about their diet during pregnancy. Those who consumed higher amounts of chocolate were less likely to develop pre-eclampsia. This may be because theobromine in chocolate keeps blood pressure steady.

10. Slowing the progression of dementia

Flavanols in dark chocolate are thought to reduce the risk of dementia by increasing blood flow around the brain and protecting brain cells from damage. In an Italian study, 90 people over the age of 70 with mild cognitive impairments were divided into three groups and given different strength cocoa drinks to consume over eight weeks. Those whose drinks contained a higher concentration of cocoa showed the most improvement on cognitive tests.

About Dick and Danna

OUR BUCKET LIST: 1950 First kid in the area with a portable radio on my bike when I was in grade school........... 1951 Built a 5 watt radio transmitter when I was in high school and went on the radio from home. Not the most legal thing to do. Built a PA system from scratch also........... 1951-1954 Learned to play Steel Guitar. Played many shows of country music on 6 different radio stations with different groups in Western Pennsylvania........... 1954 Married Danna Lewis at when she was 15 years old........... 1960 Got into Citizen Band Radio. Danna and I were two of the original founders of CB Rangers CB club in Butler. We published a call book of all of the CBers in the Tri-State area............ 1969 Danna and I were two of the original founders of the Tri-State Country Music Association. I wrote a column for their newspaper every month........... 1960 We went to Nashville. Met Ralph Emery of WSM radio and Archie Campbell, a Hee Haw TV Entertainer. Had coffee with them at Linbaugh’s Restaurant in Nashville. Archie bought the coffee........... 1965 We developed a successful network marketing business. In later years developed a few others. Greatest training on attitudes and success........... 1968 Had a Built an outdoor stage. Had a country music jam session on our lawn at home with around 500 musicians and their family from 5 different states........... 1969 Played music on the staff band of the WWVA Jamboree and backed up all of the entertainers in front of thousands of people for 4 months. WWVA was second largest country music show at that time next to WSM Grand Old Opry........... 1984 Danna started her own typesetting business in her home. Danna Vernon Graphics had customers in 3 counties. Very successful. She taught herself how to run the typesetter machine. It was a photo typesetter. She also did layout work for printers........... 1988 I taught the secretaries at Butler hospital how to use word processing and computers, but I never had any schooling or education on it. I also did some computer programming. Before this I ran the printing operation at the hospital........... 1989 I quit a good computer job and Danna and I bought a printing franchise, Minuteman Press in Butler PA. Operated it for 5 years............ 1994 We bought a motor home. went to Florida. Spent 9 years going to Florida for 6 months every year and back to Pennsylvania for 6 months............ 1995 We played music with “Spur of the Moment” band in Florida........... 2001 Never knew my dad. Met him in 2001 and Danna and I spent a wonderful 5 years together before he passed away. Went on a wonderful 2 weeks tour of Europe (5 countries) with him. He lived in Bradenton Florida........... 2002 Danna started singing and ended up running the Suncoast Jamboree in Florida, She had her own band and scheduled everything. She sang and emcee’d the show. Played many of the RV parks in the area........... 2004 Started a recording studio in Pa and FL. Danna recorded numerous CD’s........... 2007 Since I was a little kid, I have always wanted to wear the spots off a deck of cards. I finally accomplished it this year. Threw the deck away........... 2010 We started and played in various Gospel Music Groups. Country Transition, Good News Country Gospel. Played churches all over Western Pennsylvania........... 2010 We played music on television shows on WHCU-TV Kittanning........... 2010-2014 Danna and I did a 30 minute interview talk show, Danna’s Radio Diner, on WTYM & WAVL radio. Over 30,000 hits from over 100 countries on our website as of June 2017. Still get many hits every day........... 2010 Danna and I were on TV participating in Family Life TV WHKU helping their Christmas Auction on television........... 2011 Danna and I both read our first commercial to be broadcast on WTYM radio. Also I wrote a radio promo and a short radio script........... 2012 Operated a TV camera on a live TV show on WKHU-TV........... 2013 Produced an hour TV show – Armstrong Trails on WKHU-TV Kittanning, PA. Produced a monthly live country music dinner show with various bands at WTYM radio........... 2014 We went on a country music cruise and interviewed 12 top county music TV stars for our radio show........... 2014 Rode for an hour in the cab beside the engineer of a locomotive on Kiski Jct. railroad. Broadcast it on one of our radio shows........... 2014 Played Steel for Nashvile recording star Teea Goans when they came to Kittanning on WKHU-TH and WTYM Radio. Also in 2013 backed up Joann Cash (Johnny Cash sister)........... 2015 Started Danna’s Internet Café, an internet radio show. Also shows were run on WXED-FM 107.3 and WFSN-FM 96.7. for a year and a half........... 2016 I bought a Uke Bass and learned to play it. Played a jam session a week later. Sounds like a big upright bass.
View all posts by Dick and Danna →
This entry was posted in Just Good Stuff and tagged Blood pressure, Dark Chocolate, Good health, healthy, reduce inflammation. Bookmark the permalink.